We are thrilled to announce that former Hamilton-Wentworth District School Board (HWDSB) Student Trustee (2017-18) and Westmount Secondary School student, Ruby Hye, has been named a 2020 Loran Scholar.

Out of 5,194 applicants, Ruby was one of 36 recipients of the scholarship. The Loran Award is Canada’s largest and most comprehensive four-year undergraduate award. 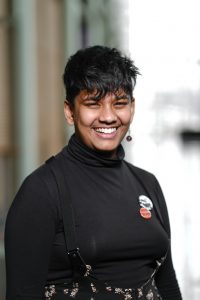 This year, the Loran Scholars Foundation selected 36 exceptional students from across Canada to receive the award. The award, which is tenable at 25 partner universities, is valued at $100,000 over four years, and includes mentorship programs, funding for summer internships and participation in an extensive network of past and present scholars.

In 2018/2019, the Loran Scholars Foundation interviewed 518 candidates in 21 regions across Canada, and invited 88 finalists to Toronto for national selections weekend in February 2019. Students describe the process as an opportunity to reflect on their motivations and to imagine the lives they want to live. Whether or not applicants are selected for an award, many students come away from interviews with new connections, friendships and ideas.

Ruby’s extracurricular involvement helped in her reception of the Loran Award. Ruby’s many accomplishments include her involvement with the Disability Justice Network of Ontario, her service as a former HWDSB Student Trustee, and her time as a co-op student at former Councillor Green’s Ward 3 office at the City of Hamilton.

All at HWDSB wish Ruby success in her future endeavours.