Steve Milton: John A and Delta kids used to be rivals. What’s happening at Bernie Custis?

Steve Milton: John A and Delta kids used to be rivals. What’s happening at Bernie Custis? 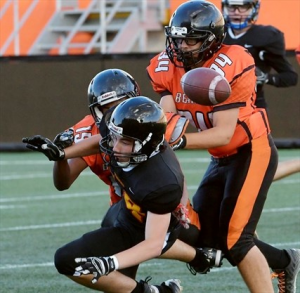 The final score is the smallest part of this tale, but here it is anyway: Tigers 18, Bears 14.

The bigger story, the one that will survive the longest, is how the Bernie Custis Secondary School Tigers football team, after just four weeks in their brand new east-end building, came together to play for their first-ever game Thursday at Tim Hortons Field against the Bears of Glendale Secondary School. And what the impact of sports teams could eventually have on uniting a student body potentially divided by prior history.

The bulk of the Bernie Custis population comes from the amalgamation of Sir John A Macdonald high school and Delta high school, both of which were shuttered last summer; Macdonald after 49 years in existence and Delta after a historic 95 years.

But last fall, while the two lower-city schools were still operational but without enough players for either of them to field a full senior football team, the Hamilton-Wentworth District School Board athletics department allowed the schools to build a combined team, which is not usually permitted. They practised at Tim Hortons Field under coaches Jeff Kott from Macdonald and Chris Patton of Delta and played against other city teams. Then, in the spring, they did it again in junior football with Kott working with former Tiger-Cat Roger Dunbrack. Kott, Dunbrack, Tom Keopapant and Geoff Connor are this year’s coaches.

For Thursday afternoon’s upset of Glendale, the Tigers — the name was chosen from five possibilities through an online poll of future Bernie Custis students last spring — dressed 35 players. Among them were 22 former Delta students (10 seniors, 12 juniors) and seven (six seniors, one junior) who played for one of last year’s combined teams.

Because of that, from Day 1 at the new school they had a carry-over culture.

“It brought us together,” says Josh Seager, an 18-year-old linebacker, who came from Macdonald. “A lot of John A and Delta kids didn’t get along before. There were always problems. But I think joining the two teams together last year made a difference. I see a lot of kids getting along now that we’re in the fourth week of school and kids are on other teams together, too.”

Kott, who teaches phys-ed, says that it’s natural for older students to gravitate toward groups of friends they made at either Delta or Macdonald and that playing on, or cheering for, teams at the new school should create a sense of identification with their new school. It did Thursday.

There are, some students say, still Delta and Macdonald pockets at the school, but it’s early days.

Tigers defensive lineman Donavon Frost is 16 and, while at Delta, played for the combined junior team last spring. Earlier this fall, he intervened in a percolating conflict between two groups at Custis.

“A Delta guy and an SJM guy were saying bad things, one school about the other,” Frost said “Their friends came and got me and I said to them, ‘Hey we’re all one school now, we’re a family now.'”

He says he learned that from playing last spring with teammates from Macdonald.

There were about 300 fans at Thursday’s tight game, about evenly split between Glendale and Bernie Custis. Front and centre in the stands were Grade 12 Custis students Samantha Murray, Alexis Vanderburgh, Madison Emsley and Diana Lewis. They all went to Macdonald last year and all play on the Custis senior girls basketball team which beat Westmount earlier in the day. They said that when basketball first started, there was tension between the Delta and Macdonald athletes because they’d played against each other last year but “we had to let it go,” said Vanderburgh.

“At first I didn’t think it would work,” Lewis says of last year’s combined football teams, “but it has.”

Murray pointed out that it helped build chemistry on the team and the friendships were already there this fall.

“And that’s especially important in a full-contact sport,” Vanderburgh added.

Can that chemistry and friendship be an example to the rest of the student body?

“It should be,” Emsley said.

The new team is playing its home games right across the road from the same parcel of land on which, in 1951, Bernie Custis forged some massively underwritten sports and cultural history by becoming the first African-American quarterback in professional football. His Hamilton Tiger-Cats, played at old Civic Stadium, later renamed Ivor Wynne Stadium, which was torn down in 2012 to make room for the construction of Tim Hortons Field.

Custis, was a bona fide U.S. college star and was assured of playing in the NFL … but not at quarterback because of an unspoken, but very real, colour bar against non-whites playing the position. He came north, made the league all-star teams as the Tiger-Cats quarterback and later at running back, and went on to an exemplary career as a teacher and principal, and was named to the Canadian Football Hall of Fame as a builder in 1994 for his coaching work with junior, college and university teams.

Before the first game for the school named after Custis, who died two years ago, Seager, the new Tiger linebacker said: “This is definitely a huge day no matter how we do on the field. We’re making history.”