HWDSB Trustees chose names for five new elementary schools at their Board meeting on May 13. The selected names are for new schools on the Beverly Community Centre site, the Eastdale site, the Ancaster Senior and Fessenden site, the CH Bray site, and the Summit Park site.

“We are excited to see so many new schools being built that will provide our students and communities with brand new learning environments,” said Alex Johnstone, Chair of the Board. “This school renewal and revitalization is a result of the Pupil Accommodation Reviews (PARs) that took place over the last few years to ensure proper learning spaces for students.”

Trustees approved the following names for the new schools:

“We are so pleased with the work of all the naming advisory committees, as they have suggested some great names for the five new elementary schools,” continued Chair Johnstone.

The five naming advisory committees reviewed 658 submitted names and selected up to three options to present to Trustees based on the Board’s policy.

About the Names and the School

About the Name: The Eastdale name is being retained for this new school.

About the School: The former Eastdale school was torn down to be replaced by the $11.5 million, 564 pupil place, K-8 elementary school that will accommodate former Eastdale families, as well as families who attend Mountain View Elementary School. The new school is expected to open in January 2020.

About the Name: Frank Panabaker, an artist who made his home in the Hamilton area for most of his life, also

enjoyed a considerable international reputation for his paintings of the Canadian landscape.
Frank Panabaker was a member of the Allied Artists of America, one of a handful of Canadians ever to be elected to the group, an associate member of the Royal Canadian Academy, and a member of the board of trustees for the National Gallery in Ottawa for six years.

Frank made his home in the Hamilton area for most of his life. He attended the Ontario College of Art in Toronto and continued his studies at the Grand Central School of Art in New York.

Much of his subject matter was local scenes in and around Ancaster, the Dundas valley and marsh, and of course, Hamilton. From the royal yacht Britannia in Hamilton Harbour, to the Hamilton Farmers’ Market, the Tiger Cats and Gore Park, Frank Panabaker documented the life and times of the Steel City from the 1940’s to through to the 1990’s. He painted up until the last week of his life, dying in his 88th year in 1992. In 1996, Frank Panabaker was inducted into the Hamilton Gallery of Distinction.
About the School: The $3,702,489 addition to Ancaster Senior is expected to be completed by this September. The addition allows for the campus to house Grades 1-5 at the current Fessenden site with Kindergarten and Grades 6-8 at the Ancaster Senior site.

About the Name: Rockton is a small community located 32 kilometers northwest of Hamilton. It has been the host of the famous Rockton World’s fair since the mid-1850’s. The title of “World’s Fair” was first used by local newspapers in 1878. Rockton also draws visitors as a well-established community with ties that stretch as far back as the United Empire Loyalists. According to writing by Robert Kirkland Kernighan, a group of settlers decided on the name “Rocktown” which later was shortened to Rockton. The name likely derived from the rocks, stones and quarries in the area.

About the School: The new $14.4 million, 511-pupil place, K-8 elementary school, will house current students from Beverly Central, Dr. J Seaton and some students from Queen’s Rangers. The new school is expected to be complete in the 2019-2020 school year.

About the Name: Shannen Koostachin of Attawapiskat First Nation advocated to raise awareness about the state of 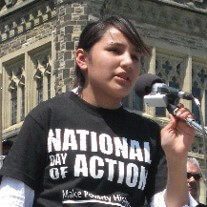 aboriginal education in remote communities such as Attawapiskat. She promoted “safe and comfy” schools and culturally based education for First Nations children. Shannen and the children of Attawapiskat launched the Attawapiskat School Campaign to reach out to non-Aboriginal children all across Canada and write the federal government and demand a new school for Attawapiskat. In May of 2010, Shannen Koostachen passed away in an automobile accident.

About the School: The new $14.8 million, 625 pupil place elementary school near Keystone Cres. and Bellagio Ave. will house students from Janet Lee, Tapleytown and Bellmoore and helps to relieve accommodation pressure in upper Stoney Creek. The school includes a 3-classroom childcare facility (Infant, Toddler and Preschool) and is projected to open this September.

About the School: This new $12.25 million, 495 pupil place, K-8 elementary school on the current C.H. Bray site will house students from Queen’s Rangers and the current CH Bray. This new school is currently in the municipal approval phase.