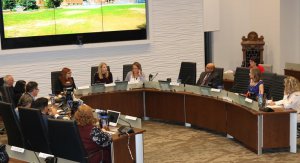 Indigenous students are poised to get a seat at the Hamilton-Wentworth District School Board table.

Trustees on the board’s governance committee are unanimously recommending adding a third student trustee next September who would self-identify as Indigenous and be elected by all students in grades 7 to 12. [Note: This motion passed at Board on Sept. 30, 2019.]

As with the other student trustees, the successful candidate would be able to debate and vote on board motions, although the vote would only be recorded and not count in the outcome.

The Indigenous trustee spot had been recommended by board’s First Nations, Métis and Inuit (FMNI) advisory committee in May and must still go to the full board of trustees for final approval.

Trustee Christine Bingham, who sits on the FMNI committee, said the new trustee will be a “massive help,” creating greater awareness of Indigenous issues among students and adults.

She said it took four years, for example, to remove a totem pole at Parkdale School after concerns were raised that it had no Indigenous connection.

The pole — featured in the school’s logo until recently — had been carved from a hydro pole felled by a city bus during a severe winter storm in 1967 and told the story of that day using Indigenous symbols, including a thunderbird at the top.

“I really see it as a good collaboration,” Bingham said of an Indigenous student trustee.

Education director Manny Figueiredo said that Indigenous people were the first people in Canada to be marginalized, and creating the position is another way the board can act on recommendations by the Truth and Reconciliation Commission.

He said the Indigenous trustee could help identify how the board needs to change its systems, rather than simply adapt to what may be colonial structures reflecting white privilege.

“I think the conditions are ripe right now,” Figueiredo said, noting that there’s been an increase in student interest in high school courses on Indigenous issues.

“It’s representing the voice of all students, but with an Indigenous lens to understand what equity things we might just be missing.”

He said nearly a thousand students, or about two per cent, self-identified as Indigenous in the latest board survey, but the number must be higher given census figures show that about three per cent of Hamilton’s population is Indigenous.

Heather Miller, the board’s officer of trustee services, said the new position will likely cost about $9,150 per year, which includes a $2,500 honorarium, phone and travel expenses, and attendance at provincial trustee conferences.

She said provincial regulations require boards to have at least one student trustee, but allow a maximum of three.