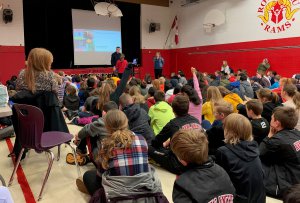 Anne Frank would have turned 90 this year. Old enough to be a great-grandmother. Young enough to turn her pen to global affairs, or the summer crush of tourists in Amsterdam. She could have shared wisdom from a long life… rather than just the 15 years she survived.

Perhaps the world’s most famous diarist, Anne Frank’s story is a heart-breaking, personal account of hiding in Nazi-occupied Holland. This week, a man who knows more about Anne than most is visiting Hamilton schools to talk about the life, lessons and legacy of a girl who never had a chance to grow old.

“Eight, six and 761 – those are the three numbers that tell Anne’s story,” said Menno Metselaar, a project manager who has been working at the Anne Frank House since 1990.

Metselaar is on a North American book tour that includes Los Angeles, New York, Ottawa, Toronto and, of course, Hamilton. He will present to about 2,000 HWDSB students this week, including a large event at Nora Frances Henderson secondary for staff.

At Rousseau elementary, about 200 intermediate students sat spell-bound as Metselaar walked them through the numbers. (“All you need to know to do my job,” he joked.) 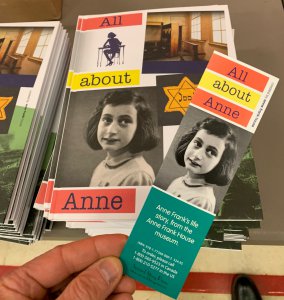 All About Anne is a book packed with historical artifacts and answers to students’ questions.

Six – The number of factory staff who helped the Jews hiding in the annex; they risked their own lives doing what they felt was right. “It was self-evident,” one said later, “I could not let my friends be slaughtered by Nazis.”

761 – The number of days the Franks spent in hiding. Days during which Anne reflected, wrote and fell in love with Peter. She wanted to be a journalist and author. Her diary was strewn and left on the floor by Nazi police when she was discovered. Helpers later collected it, gave it to her father Otto, which led to its publication in 1947 as Het Achterhuis (The Annex).

What happened, in the end, happened to millions of European Jewish people during the Holocaust. But, for a gym full of youth at Rousseau, hearing about Anne’s death from disease in Bergen-Belsen brought a long list of well-considered questions.

“Why did Hitler hate Jewish people?”

“Couldn’t people pretended not be to Jewish?”

Metselaar clearly explained the long history of anti-Semitism, the step-by-step restrictions imposed by the Nazi regime, the arrest in Austria of the policeman responsible for Anne’s capture and the cold case the continues regarding who told the Nazi about the hideaways.

But, beyond the facts, Metselaar highlighted Anne’s message of optimism. She embraced equity as much as she reviled fascism. Her message is one for us to remember today.

“We are all living different but equal lives. We all want to be happy,” he said, sharing a quote from Anne’s diary. “They fear those who are aware,” added Metselaar, noting the graffiti he walks by on his way to work. The past provides the context and the story of Anne, he said, but the present gives us an opportunity to do what we can to help others. 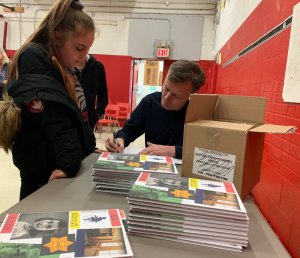 Menno Metselaar is on a North American book tour, and signed copies of All About Anne for students.

For Michelle Fawcett, a Grade 6 teacher at Rousseau, the message comes at the perfect time; her students had been looking at Anne’s diary in class, they had explored the virtual tour of the Secret Annex at annefrank.org, and they are exploring Canadian history in ways that give voice to the voiceless.

“We have been learning about many types of discrimination in Canada, including Indigenous Peoples,” Fawcett explained. “We have a lot of privilege to unpack… but this sets the stage when it comes to understanding marginalized people.”