A last walk through the halls of Delta Secondary School

A last walk through the halls of Delta Secondary School

By Susan Clairmont
The Hamilton Spectator 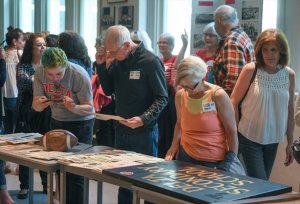 Visitors look a at a display of Delta Secondary School memorabilia from the 1970s in a classroom of the Hamilton high school dedicated to that decade during an open house Saturday. – Scott Gardner , The Hamilton Spectator

On the radio, “Blue Tango” by Leroy Anderson and his orchestra topped the charts.

“An American in Paris” won the Best Picture Oscar.

And in the auditorium of Delta Secondary School, Gord Carruth was staging the school’s very first variety show.

He and his buddies wrote and produced it in their final year — 1952 — thereby cementing Gord’s lifelong passion for theatre, education and all things Delta.

“This school meant a helluva lot to me,” says Carruth, 85, as he works the “1950s Room” at a jam-packed open house at the Main Street East institution Saturday.

The occasion is the final chapter in the 95-year history and 100,000 students of Delta — Hamilton’s oldest high school. It will close its doors forever after exams.

Delta is one of several schools being shut down by the Hamilton-Wentworth District School Board because it is too old to repair or deemed surplus.

Come September, Delta students along with many students from the also-closing Sir John A. Macdonald will attend the newly built Bernie Custis Secondary School on the site of the former Scott Park Secondary School on King Street East. The school will take 1,250 students.

Delta had its own personality, says Carruth.

“It was the honesty of the East End,” he says. “We were what you saw. There wasn’t a lot of pretense at all.”

Carruth grew up on London Street and excelled as a student. He was student council president and won a scholarship to McMaster University, where he studied languages.

He took his degree back to his old Delta classrooms, joining the faculty there from 1957-1960 as a French and German teacher.

Despite transfers to other schools, it seemed impossible to get Delta out of Carruth or him out of Delta.

He returned yet again to become vice-principal from 1973-79. In all, his time at Delta spanned three decades.

Later, he was principal at Sir Allan MacNab and Westdale secondary schools.

These days, Carruth is a renowned playwright and composer with a penchant for political and historical musicals. His work has won the Canadian ACTRA award for best dramatic writing and the Critics’ Commendation at the Edinburgh Festival.

Carruth was one of the founding directors of Hamilton Place and helped usher in Theatre Aquarius.

The roots of all that success were at Delta, he says.

“The teachers gave us our wings.”

John Nicholls says Delta is where he grew up.

“This place is my history,” he says, pouring over a yearbook beside former teacher June Peace. “It’s Hamilton’s history.”

Nicholls attended Delta from 1987-92. He has fond memories of skipping class to go to the arcade and Mother’s Pizza Parlour and Spaghetti House across the street.

Peace, who taught English, geography and history, says on one of her first days teaching at Delta in 1985, some colleagues told her to leave her bagged lunch in the fridge to go over to Mother’s with them for lunch.

Those teachers became her lifelong friends.

Inside the doors of Delta, handing out name tags and earning her volunteer hours, Grade 9 student Madalyn Jenkins has never heard of Mother’s Pizza.

And though she won’t graduate from Delta, she feels a connection to the hundreds of grads streaming through the halls one last time just the same.