Vandana Verma of Prince of Wales Elementary School recognized that puppets are a good way to deliver information to children. She created her own video series instead of using widely available shows, such as Sesame Street or The Muppets, to reinforce messages of kindness. In this special school year when children are spending more time at home, she decided to share “Let’s Talk Kindness” on YouTube. 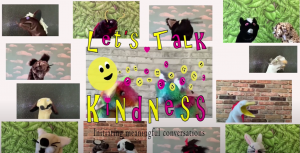 0. Schools were shuttered for Ontario kids and by then, Verma had already been teaching online for two months. She was missing her physical classroom and seeing her students in person. She craved for the teachable moments with her students and the life lessons she used to instill in them.

During the same time, she came across famous ventriloquist Jeff Dunham’s show and the idea of making puppets and teaching children through talk shows came to the fore.

How the Puppets Came Alive

Verma bought the materials and made 17 puppets by herself. She convinced her colleagues to record some of the voices and come up with a catchy theme song. Over the summer of 2020, she wrote scripts for each of the characters and worked on making her videos look more professional.  She spent countless hours watching YouTube to teach herself video making techniques using Adobe.

It was now time to make videos with her puppets. She used her iPhone to record the videos. By September, she started voice recordings and put together a 17-minute video. She then shared the rough cut with her colleagues and friends to get their feedback. Using their ideas as a guide, she took that one video and split it into seven short episodes.

She didn’t stop there. To ensure its originality, Verma decided to create her own tunes by taking keyboard lessons.

From idea to the final product, it took her about seven exciting months. By Christmas, her videos were ready. On January 2, 2021, the first episode of “Let’s Talk Kindness” made its debut on YouTube.  Since then, she has released a new episode every two weeks.

Now that she has a template, it only takes her about a week to put together each new episode.

“I’m very proud of what I’ve accomplished for two reasons,” said Verma. “First, I love the message that it’s putting out there and I really believe it’s got great potential to help make positive change happen. Second, I did everything myself.  It’s been a lot of work and very frustrating at times, but I learned new things and was able to put it all together on my own.”

What Does “Let’s Talk Kindness” Hope to Achieve

“Spreading the message of kindness in this trying time,” replied Verma. She believes that promoting kindness is important right now because the whole world is going through challenges.  The goal for the series is to help increase meaningful conversations around kindness and create strong activities that will eventually make positive change happen.  She believes kindness is a simple word that can change millions of lives. If we were all kinder to ourselves, others, and the environment, we would all be better off.

Through the series, Verma is trying to teach that kindness is often wrongly thought of as a weakness.  Yet, it is the most powerful act a person can display. Kindness takes strength and can sometimes be the hardest thing to do.  The more we talk and learn about kindness, the more we will see it in the world.

The first two episodes of “Let’s Talk Kindness” can be found in this post. For the third episode as well as future ones, be sure to visit the MakeKindnessCount YouTube channel.