Saltfleet District High School gets its own robotics team

Saltfleet District High School gets its own robotics team 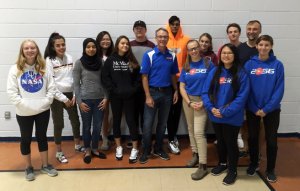 Team 16423, a new robotics team based at Saltfleet District High School, gathered for the first time on Sept. 7. The team is being mentored by Orchard Park’s Team 2056. – Jeff Beattie photo

Saltfleet District High School now has its own robotics team.

Team 16423 made its debut on Sept. 7 at the Valley Park Community Centre.

The team will compete as part of the FIRST Tech Challenge, joining over 68,000 team members on nearly 7,000 teams in 37 countries. The Saltfleet contingent is part of a pilot project that saw the creation of over 20 new teams in Ontario. It will have up to 15 students, and is open to all grade levels. On Sept. 7, they were joined by members of Orchard Park’s Robotics Team – Team 2056, who are mentoring the new team.

The Orchard Park Team competes in the FIRST Robotics Challenge, and is ranked in the top five teams worldwide. Over the course of the next four months, Team 16423 will design and build a robot to perform specific functions to score points during competitive matches.

The game this year, known as Skystone, is a collaboration between FIRST Tech Challenge and Lucasfilm’s Star Wars franchise. The competition season will culminate at a new Provincial tournament this January at Durham College in Oshawa. On hand for the Sept. 7 launch were staff and Parent supporters and mentors from both schools, along with Saltfleet Principal Christine Nicolaides, Hamilton-Wentworth District School Board Superintendent Jeff Gilles, Ward 9 and 10 trustee Cam Galindo, and Ward 9 city councillor Brad Clark.