From ‘Harry Potter’ to the solar system: Westmount trivia team heads to Reach for the Top national championship

From ‘Harry Potter’ to the solar system: Westmount trivia team heads to Reach for the Top national championship 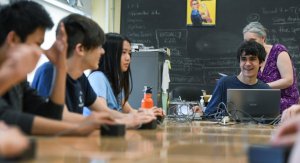 Grade 12 student Samir Mechel quizzes his teammates during a practice session of Westmount Secondary School’s Reach for the Top team at the Hamilton school May 22, 2019. The team is heading to the National championships in Toronto May 25. – Scott Gardner , The Hamilton Spectator

By Natalie Paddon
The Hamilton Spectator

In a second-floor classroom at Westmount Secondary School, teacher Jay Misuk is rallying the troops for the weekend.

School is over for the day, but close to a dozen students are sitting quietly in desks, facing one another, their hands poised on black buzzers.

Grade 12 student Samir Mechel is seated at the head of the group in front of a laptop. He starts peppering the two teams with questions, spanning subjects from “Harry Potter” to the solar system.

Before Mechel can get the question out, someone rushes to buzz the red button and blurts out an answer.

The teammates laugh with one another as the guess ends up being wrong.

It’s crunch time for Westmount’s senior Reach for the Top team as they prepare for the national finals of the fast-paced Canadian academic quiz competition in Toronto this weekend.

Two weekends ago, the team came in second across the province, losing only to their old rival University of Toronto Schools in the playoffs.

Misuk says it’s the first time a Hamilton team has made it to the Schoolreach national championship in the program’s more-than-50-year history, although a team from Ancaster competed in the 1990s before the Hamilton and Wentworth County school boards amalgamated.

“The stars have kind of aligned with this group,” he said, noting they’re one of the better gelling teams with a strong grasp of their categories and are keen to learn. “We’ve had some really strong teams in the past, but the kids just have not been able to get over their differences,” Misuk said. “Either they’ve been too competitive with each other or there’s been drama, since it’s high school, or there have been other issues where we’ve had a really strong player, but they’re just not able to put in the full commitment.”

It’s also the first time a team from Westmount has beat Misuk in practice, which he admits stung a little at first.

While heading to nationals is new for the 31-year-old coach, this is not his first rodeo with the trivia competition that some may remember on television as far back as the 1960s.

As a student at Westmount in 2004 — the first year the school had a team — Misuk and his group made it to provincials. (At that time, it was still shown on TV but that stopped around 10 years ago.)

He’s been coaching the school’s senior team since 2010 before he finished teachers’ college and later became the convener for the Hamilton-area league.

Misuk recently received bad news when he learned he is one of 99 Hamilton high school teachers the public board is laying off, but he is determined to do what he can to keep coaching the team going forward.

Then and now, Reach for the Top has offered a sense of community some students might struggle to find elsewhere.

While practice is fun, it’s also enriching as students spend time memorizing facts and poring over Wikipedia pages to prepare.

Grade 11 student Phillip Darley said joining Reach for the Top has helped him learn and absorb information more quickly. Even after just a few months, he said he felt himself getting better at studying for tests.

Marcell Maitinsky, also in Grade 11, said being part of the team has shown him that memorization still matters despite that type of learning fading away in today’s education system.

As the team practises for this weekend’s tournament, the teenagers seem more excited than nervous.

Amy Wang — a member of this weekend’s competing “A Team” — said things can get pretty competitive. But teams from different schools do talk and make friends with one another, noted Maitinsky, another “A Team” member.

Ultimately, it’s about students who are passionate about the same things, said Grade 11 student Neil Lin.

“This doesn’t have the same wide appeal as football … and yet it does because most people will watch Jeopardy and most people are at least interested in trivia,” coach Misuk said.