John C. Holland Awards shine light on more than a dozen who improve life in Hamilton

John C. Holland Awards shine light on more than a dozen who improve life in Hamilton

The annual awards honour African-Canadian achievement and contribution in the city of Hamilton. 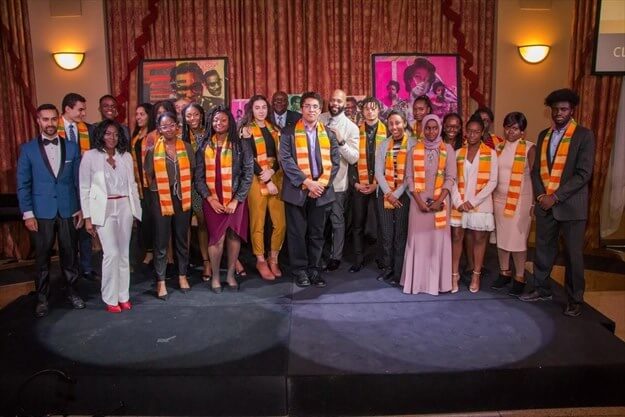 “This was arguably one of the best events we’ve had,” said Hamilton Black History Committee member Terri Bedminster. “The energy and representation in the packed, 500-seat room was amazing.”

Tyler Williams: Youth leader who owns a silk screen studio, where he designs original prints. He also performs as a rap soloist and produces original music in his home studio. Completed more than 140 hours of community service.

Salsabil Sarhan: A first-year student in the faculty of social sciences at McMaster University, and a recent graduate of Sir John A. Macdonald Secondary School, she has been student council president, athletic council president, senior girls’ basketball team captain; Link Crew leader and mentor and founder of the Health Action Team.

Rebecca Matsakawo: Volunteer for social justice and charitable causes. As a member of her St. Mary’s Catholic Secondary School’s Diversity Team, she assisted on campaigns to help the less fortunate in the community, as well as spearheading social justice projects, such as a campaign to petition Prime Minister Justin Trudeau to raise awareness about issues refugees are facing coming to Canada; Life Chain; We Are Silent; The Pilgrimage; and St. Mary’s Christmas Adopt-a-Family. Tutors math and science, member of Zonta e-club, Reading Buddy at HPL.

Cree Bell: Accomplished student athlete, entrepreneur and active volunteer, known for paying tribute to her roots. One of the city’s elite track and field athletes. Assists youth in phys-ed, selling her art at Wellwood Cancer Centre. She is the creative designer of books targeting grades 7 and 8 Indigenous youth, encouraging through Wilfrid Laurier University Jumpstart Workbooks and Indigenous Safe Communities Playbooks.

Cordell James: Sophomore in the honours bachelor of management and organizational studies at Western University. Student athlete, he played in the Ontario Hockey League and leads elementary students in talks about mental health, volunteers with Salvation Army and Seasons Centre for Grieving Children, and is co-founder of Western Mustang’s Student Athlete Mental Health Initiative.

Israel Crooks: In 2013 he created the impART Project, through which he has mentored at-risk youth in Hamilton, and Kingston, Jamaica, by helping them to cope with strong emotions through the canvas. Fully funded from the sale of his artwork, he works closely with area teens to help them to articulate their experiences through painting and drawing. In March 2018, he ran an “All in for Change” workshop, as part of Empowerment Squared’s Our Youth Our Future, a large-scale campaign to shine a positive light on the contributions and aspirations of black youth in Hamilton.

Mark John Stewart of FlyPrint: After10 years of running his company, FlyPrint, he also teaches strategic management at McMaster University and is chair of the advisory council of a Canadian-based international charity focused on youth development, called Empowerment Squared. Since 2007, he has been an adviser and supplier to the Hamilton Family Health Team, Empowerment Squared, the Disability Justice Network of Ontario, Vibez Caribbean & Southern Grill, Caribbean Flavah, New Vision United Church, and an endless list of other companies and groups. He hires co-op students and provides learning opportunities to young leaders.

Albert Graham: A Jamaican-Canadian who arrived in Canada in 1975, he worked for 30 years as a steelworker in Hamilton. Throughout his career and while raising his family he contributed to his community through Stewart Memorial Church. He was trustee and assistant treasurer. He also worked with the Out of the Cold program, the Jamaican Foundation of Hamilton, and Extended Care Hamilton. He turned the pain of the tragic loss of his son in Afghanistan into a perpetual gift, by establishing the Mark Anthony Graham Memorial Bursary at Sir Allan MacNab Secondary School. He also worked with the school to establish the Sir Allan MacNab track and field outdoor meet. He also sponsored a scholarship through the Mount Ward Alumni Association.