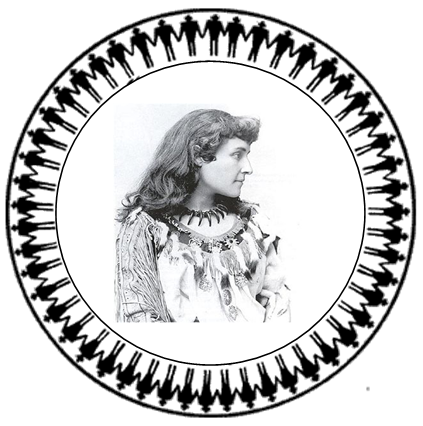 Pauline Johnson (1861-1913) was a Mohawk born at Chiefswood, the family home on the Six Nations reserve on the Grand River. She had a very conventional upbringing, being educated by a governess at home. She wrote poetry and even performed with the Hamilton Dramatic Society.

Her poetry was first published in 1883 and in 1892 at age 31. For seventeen years she entertained audiences in Canada, the United States and England. Her stage performances emphasized her love for her native heritage, as well as her beloved Canada. Pauline Johnson died in 1913 and she is buried in the city of Vancouver.

Pauline Johnson Public School first opened its doors to students on September 5, 1967, however it was not until November 4, 1968 that the school was opened with an official ceremony. The auditorium was decorated with many pieces of student artwork celebrating Pauline Johnson heritage.

Upon opening, the school housed 14 classrooms and 345 students. By 1977 the school population had fallen somewhat but became the first elementary school on Hamilton Mountain to offer french immersion instruction. French and English programmes co-existed until Norwood Park was reopened in September, 1987, which caused the relocation of the french immersion programme. Pauline Johnson School reached its peak enrollment of 481 students in 1989 and now accommodates just less than 300 pupils.

In 1992-1993 Pauline Johnson School celebrated it’s 25th Anniversary — 25 years of following the spirit of Pauline Johnson by encouraging independent, life long learners with a love for literature, Heritage and Canada.

On May 18, 2017 we celebrated our 50th Anniversary by having an open house to take a walk down memory lane and show off our new classrooms and gymnasium.