Proud of Our History 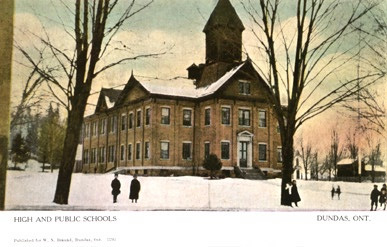 The Dundas Central Public School is located at 73 Melville Street in the older section of the town of Dundas, on a block of land containing 2.4 acres. Records show that the first section of the building was constructed in 1857, when Ontario was called “Canada West” and before Confederation.

The History of Schooling in Dundas

After the American Revolution in the late 1780s when the British regiments were disbanding, and the United Empire loyalists were seeking new homes, many of the settlers came form the eastern states of USA, as well as settlers from Europe in search of new homelands. Many immigrated to the Dundas Valley area. At first the settlers often selected their own sites, but to keep order and form lots and farms, the government sent out surveyors to mark off roads and set up lots in the surveys.

Four districts were formed in 1786 in the western part of Quebec. Nassau was the district which included the Niagara Peninsula as well as the Dundas Valley, West Flamborough and Ancaster. The district became the District of Home in 1792 and later the District of Gore in 1816. In 1787 the Dundas Valley lands were virtually unsurveyed with possibly only one family living in the area. Mrs. Anne Morden and her family arrived in the valley in 1787.

The settlers soon established schools, and since Common Schools were not operating until 1816, private schools for education were formed. The following is an account of private schools in Dundas written by T. Roy Woodhouse from the History of the Town of Dundas, Part 3:

“Dundas had many private schools in its early days, but many of them have been forgotten, leaving no record to show that they really existed. The earliest schools were one-roomed log structures, with one door, and one or two windows, a fireplace at one end, and table and chair in the middle of the floor for the schoolmaster. A single row of benches was placed around the room walls with a shelf-like projection for the students to hold their writing materials.

Usually, the pupils sat with their backs to the teacher. There might be a map with a picture or two also hanging on the wall. There were only two or three books which belonged to the teacher, who guarded them with great care. At first shingles or birch bark served as writing materials, and pencils were formed from melted foil materials. In later years, real paper, goose quill pens, and homemade ink were used.”

Since children were needed in the summer to work at home, the earlier schools were held only in the winter months, or when work was completed. The school fees prior to 1840 averaged about 10 dollars for three months with the teacher hoping for an income of two hundred dollars a year. Some pay was to be in cash and some obtained by the teacher boarding among the families. Most of the payment was in firewood as well as the free board.

Once a week the boys sawed and split the firewood and the girls swept and dusted the school room. All grades were taught at the same time in the same room by the same teacher.

About 1820 the married schoolmaster who taught in his own home, began to replace the transient teacher who boarded around the neighbourhood. Female teachers began to appear in the 1840 decade. In 1857 the first municipally built school in Dundas was opened after which female teachers nearly supplanted male teachers in both public and private schools. However, the principal’s position remained mostly with men. The men also taught most of the positions in high school here.

In 1836, Robert Spence commenced teaching school in a home on York Road. Around 1838, he moved to a building on King Street, the present site of the Melbourne Hotel; then about 1840 he taught on a stone building on the northwest corner of Park and Princess Streets. In 1847, the Town’s first Board of School trustees was formed, at which time, they took over the village school, formerly privately owned by Robert Spence. Mr. Spence was hired to run the school and was paid two shillings per month for each pupil.

In 1871, schooling became compulsory for children from seven to twelve years of age.

According to records in the Dundas Museum, the first Kindergarten class was formed in the Dundas Public School in 1873. A register, dated 1887, show clearly that in that year there was a Kindergarten connected with the Public School. This was taught by a Miss Scott, who had seventy-one pupils on the roll. It is not official but believed by many, that Dundas Union School had the second Kindergarten in North America to be integrated into a school system.

By 1874, attendance had increased to such an extent that more space was necessary, so the School Board purchased the red brick building at the corner of Main and York Streets. This was generally known as the Ward School.

In 1885 there were 458 pupils enrolled in the Public School system. An addition of eight rooms, generally known as the Bell Tower Section, was built on the back of the original building. After the addition was built, the Ward School was vacated and sold.

This new Bell Tower section consisted of four rooms upstairs and four rooms downstairs which were added to the rear of the original building. The walls joining these two sections were of double thickness. Fire escapes were erected outside the walls of the upstairs rooms. They were later removed because they were a hazard in the winter, when covered with ice and snow. The School was at this time lit by gas lamps and heated by coal. The girls’ water closet was located on the east side of the building.

The bell in the Bell Tower section was used until the early 1960s. Its current location remains a mystery.

To provide for the overcrowding in he High School, a new and separate high School building was erected and opened in 1909. This building was known as The Annex.

On January 3rd, 1930, Dundas District High School was officially opened and the High School students moved from the Annex of Dundas Central. This new building was located on the old Fisher Paper Mill site, also known as Gore Mills.

It was generally believed that the Annex section (old High School) was vacant for a period of time between 1930 ad 1948, and also that this section was used as an army training center for a time during World War II.

The latest addition to Central Public School was officially opened May 16, 1961 by the Honourable Ray Connell, Ontario Public Works Minister. This addition contained two classrooms, one on the first floor and one on the second floor. An industrial arts room was located on the lower floor and a Home Economics room on the second floor. The gymnasium was 90 ft. long by 70 ft. wide and had a capacity to seat 800. The balcony on the west end had fixed seating for 274 people. The stage on the east end was 25 feet deep and 62 feet wide. The gymnasium had an electrically operated sound-proof door that divided the floor space into halves.

A beautiful entrance and lobby faced Victoria Street. At the present time, this section is not used as an entrance during the day. Presently, all classrooms are being used at Dundas Central School. The students of Yorkview and Central Park Schools join our own students here at Dundas Central for grades seven and eight.

– an excerpt from the Dundas Central 125th Anniversary Memory Book, 1982

Dundas Central Public School is an elementary school located in Dundas, Ontario. It teaches students Kindergarten to Grade 8. Dundas Central is the second oldest school in Ontario, and celebrated its 150th Anniversary on June 16, 2007.

The older part of the building is protected by the Ontario Heritage Foundation. The tin ceilings in the upper hall classrooms are a wonderful example of the architectural features of the school. Much of the once-paved playground has been converted to a grassed area, more suited to the school’s heritage.

In June 1987 it was closed for renovations and its students were relocated to the previously closed Dundas District. The school was originally renovated as a K-8 school which left intact the art room, shop, and family studies rooms. When the renovation was complete the school featured among other new amenities a new high tech computer lab, as well as a new library which was the envy of the board. The Doctor Jean Beck Resource Center (as it was called) featured two conference rooms, as well as storage for A/V Equipment.

After relocating to the upgraded school in 1989, the seventh and eighth grade students were then moved back to District which then became a middle school for students in grade 6 – 8. The following September Dundas Central began renting some of its empty classrooms to the Brock University Teachers College.

The Gymnasium for Central Public is one of the largest facilities of its kind in an elementary school in Ontario. It is actually a large ‘double gym’ separated by a large folding door that can divide the gym in to two separate rooms. The gymnasium has two change rooms, an equipment room, teachers office as well as a large balcony mezzanine. The gym has a seating capacity of over 600.

– with thanks to our Wikipedia historian