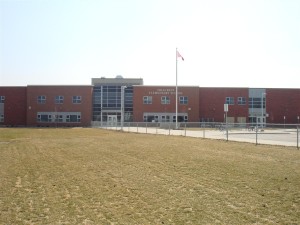 The current Hillcrest Elementary School was constructed starting in the fall of 2005,and completed and opened in the fall of 2006. The new building was slated to open for classes in September, however construction delays, combined with a mild winter and the need to also open the new Cathy Wever Elementary School prevented this from happening. Parents were informed of this decision in June 2006. Staff and students would have to wait until October 10th, 2006 to move into the new school. During the month of September, “Hillcrest” operated in the Prince of Wales building, which itself was closed and waiting for Hillcrest to vacate so that it could be torn down. Hillcrest set up their entire library, and computer lab at Prince of Wales, and operated in a “business as usual” framework. All students were bussed to and from school each day. During the last three days at the Prince of Wales building, a number of supply teachers were brought into the school to teach so that the Hillcrest teachers could pack up their rooms, in preparation for the move to the new building. During these three days, a moving company began the process of moving everything that had been brought to Prince of Wales, into the new Hillcrest site.

The Principal of the new school was Chuck Buttle, and Sherry Halla was the Vice Principal. The brand new Hillcrest building opened it’s doors to the community for a walk-through on Friday October 6th. The building did not officially open its door for first day of classes until Tuesday October 10th, 2006. Many staff members spent much of their long weekend setting up their classrooms, and preparing for the “first day” of school. During the first months, and year at the new building, there was much work that was still being completed such as painting, landscaping, and general touch up jobs that needed to be completed. In December of 2006, the “Hillcrest” stone from the original Hillcrest building was resurrected, and put on display in front of the new school. View the stone as it appears on the old school.

The first year in the new school also brought many firsts for Hillcrest. Hillcrest initiated a partnership w 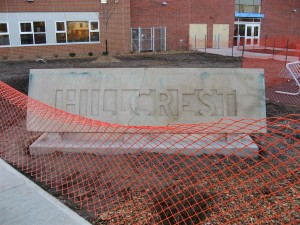 ith Hamilton Police Officer’s that was called H2PO. Once a month, several police officers visit Primary classrooms, and spend half an hour reading a book to the students, and talking about issues raised in these books, and life in general. Hillcrest had a famous visitor, when Jacksoul visited and sang for students on January 18th, 2007. Another first this year, was when Hillcrest hosted a charity basketball game called “Hoops For Hope,” in which the Director of Education, Dr. Chris Spence, brought his basketball team to Hillcrest to play the Hillcrest staff. This game took place on April 27th, 2007. Students were allowed to “get out of class” for $1, and in total, over $600 was raised and given to a local charity.

Hillcrest also participated in another Cultural Exchange trip during this school year. The “Mainlanders” went to Newfoundland from May 4th-11th, and hosted students from Newfoundland May 27th-June 3rd. On May 24th, 2007, Hillcrest held it’s Grand Opening of the new school. This ceremony was attended by all staff, and students along with several dignitaries from with in the Board of Education, including the Director, Dr. Chris Spence, and the Superintendent of Hillcrest, Pam Reinholdt. At the actual ceremony, a slideshow was shown which focused on the demolition of the old building, and the construction of the new building. Later, a representative from each class was asked to come up onto the stage, and place an item into a Time Capsule. The event was recorded, and all pictures and video from the event were later put into this time capsule as well as DVDs of the Hillcrest/Hillsdale Closing Ceremony, Hillcrest 2006-2007 Individual Student Pictures, Hillsdale Grade 5 Farewell Slideshow, Hillcrest Grand Opening Slideshow, All Pictures taken in the 2006-2007 school year, and the Opening Ceremony Pamphlet. Later, that evening, an open house was held, highlighted by a tree planting ceremony. The tree was planted in the front yard, directly in front of the library. Both the shovel used in the ceremony, and the Time Capsule were stored in the library, above the Non-Fiction bookshelf. On June 21st, 2007, the first group of Grade 8s graduated from the new school. The ceremony took place at Sir Winston Churchill high school, with the after graduation party held at Baranga’s.

Hillcrest held another Hoops for Hope event in February of 2008, and raised $510 which was given to the McMaster Children’s Hospital. Hillcrest had another first in the second year of its existence. Hillcrest partnered up with Ancaster High, and took part in webcasts, which allowed Hillcrest students to learn from their high school counterparts in Ancaster. In the first two years at the new location, Hillcrest also appeared in “The Pulse” section of the Hamilton Spectator. This section focuses on articles written by students in Hamilton schools, and can be focused on a number of issues. Some of the above-mentioned events were also written about in the Spectator.