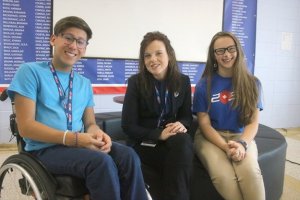 Cooper, vice-president, partnerships, for FIRST Robotics Canada, is also the author of Girls in Science: Voices for Change. She offered a presentation about inclusion during the 2056 Ways to Inspire Conference on Sept. 28 at Orchard Park Secondary School. FIRST is an acronym: For Inspiration and Recognition of Science and Technology.

Cooper appeared with Tai Young, an actor and inclusion ambassador who was recently the face of the Holland Bloorview Kids Rehabilitation Hospital’s Dear Everybody campaign.

This year, said Cooper, FIRST Robotics is promoting a theme of “allyship.”

“A lot of the times, we are conquering stereotypes, biases, technology overload, where people are kind of in their phones and they’re not being aware of those around them,” Cooper noted. “Especially for youth, it’s so important for them to learn how to include everybody in the group.”

In team meetings, for example, one group member might take over the conversation, denying others a chance to provide input.

“In FIRST, we have a concept called ‘gracious professionalism,’” said Cooper. “It means treating everybody with respect, no matter if they are your competitors or your allies. And the FIRST Robotics competition game is set up really uniquely, where you work in alliances, but those alliances change. So you really have to treat people with respect.”

Along with Orchard Park’s Team 2056, the 2056 Ways to Inspire Conference welcomed visiting robotics teams from around the area. Hosted by Team 2056, the annual event is a forum for sharing knowledge, experience and inspiration.

Many of the same robotics teams will be competing at McMaster University during the first weekend in April next year. The regional event is a stepping stone for the annual FIRST Championship, an international competition being held in Houston and Detroit next year.