In memory of writer, linguist and poet Morgan Kenney

In memory of writer, linguist and poet Morgan Kenney 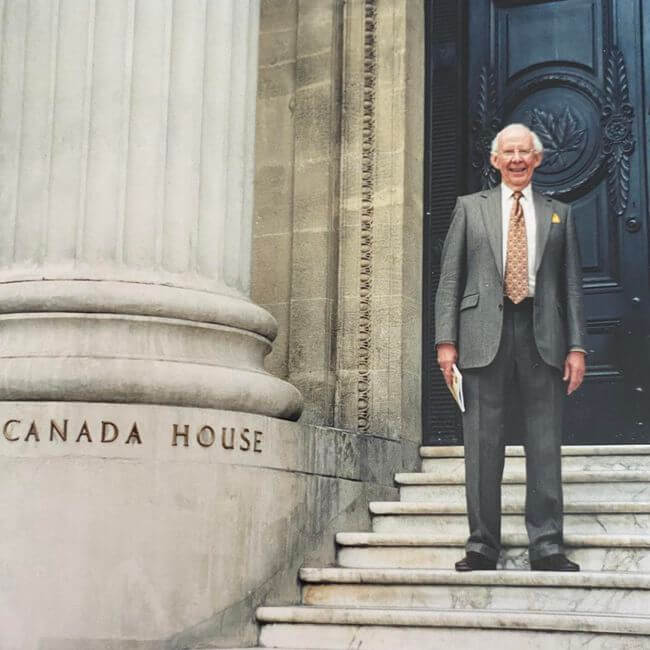 Morgan Kenney on the steps of Canada House in London. Photo Courtesy of Mike Katrycz and Molly Yeomans-Katrycz, Hamilton Spectator.

“Language liberated humanity from the cave. Poetry liberated language from basic meaning.” The words of Morgan Kenney, one of Canada’s most widely read authors whose books sold millions of copies, whose influence has been profound, and yet whose name may not quite register with most Canadians. More on that in a moment.

Language ignited Morgan. The flame was already lit within him as a student at Ottawa’s Lisgar Collegiate where he excelled at English, French, German — and drama.

At the same time, bombs rained down on England. Families were hurrying their children to the safety of distant shores. When a young evacuee named Petra landed at Lisgar she would ignite another flame. Although Petra would return to England after the war she came back to Canada in 1951. Six weeks later she and Morgan were married.

Morgan earned a Master of Arts in Languages and Literature from the University of Toronto and became an educator, teaching French and German at Hamilton’s Delta Secondary School, rising to supervisor of languages for the entire school board.

But the conventional way of teaching languages in the 1950s and early ’60s wasn’t very successful. Morgan and like-minded colleagues realized there had to be a better way. He developed programs that added oral components to lessons, encouraging students to learn by speaking, no matter how simply at first.

That may seem unremarkable today, but it was revolutionary at the time. As Morgan put it in an interview “In the ’50s and ’60s writing and reading were taught, but there was no oral teaching of languages at all.”

Official bilingualism was on the rise, and scholastic publishers took an interest. Morgan began writing “textbooks” of original stories. Lessons were subtly woven in and audio recordings were incorporated. Those innovative educational tools found their way into schools across Canada. Titles that may be familiar include “Passeport Francais” and “Passeport Au Plaisir.” In all, Morgan wrote 42 books, selling over seven million copies.

In fact, Morgan and Petra were a writing team in the production. Their success allowed them to live in Burlington in fall and winter, and in Petra’s native Yorkshire overlooking the North Sea in spring and summer. They would eventually move there permanently, turning their creativity to poetry.

But on Christmas Day in 1994 ovarian cancer would claim Petra’s life. In her memory, Morgan established the Petra Kenney International Poetry Prize, with the award ceremonies and champagne reception held in London amid the opulence of Canada House. Over 14 years, the competition drew thousands of entries.

At almost 80, Morgan embarked on a new life, moving to the south of England, alone and far from the friends. But he was exceptionally gregarious, always able to strike up conversations (in three languages).

In Sussex he met Oz, a Canadian who moved to the U.K. at 21 and served during the war in the Canadian Women’s Army Corp. Both widowed, they moved in together. In a 2018 article entitled “Finding Love Later in Life,” Oz — who was then 98 — remarked that they had no plan to marry, telling the reporter “I am happy to live in sin with my toy boy!”

They shared their love in the comfort of a 16th-century retirement home, once the scene of talks to end the First World War.

While the country manor may have inspired historic diplomacy, it also kindled the heart of the writer. Morgan concluded his essay on poetry with this:

“Poetry cannot correct the problems of the world, but it can suggest there is a truth that lies beyond our individual realities, a truth that encompasses a greater universe than the one limited by our senses; a multi-levelled truth to be investigated, enjoyed and treasured.”

Morgan Kenney; teacher, linguist, bestselling author and poet, devoted husband, companion and friend, died on March 26 of pneumonia following surgery on a broken hip. He was 95 and is survived by Oz and close friends in Canada, Scotland and England.

Submitted to the Hamilton Spectator by Mike Katrycz and Molly Yeomans-Katrycz for whom Morgan was like a father and a lifelong mentor.