Bellmoore Elementary School student, Abel McHugh, has been named as a hero and was presented with the Community Safety Hero Award, after pulling two kindergarten students out of harms way.

On the morning of Dec. 2, Educational Assistant, Deb Katz was standing outside the school, when she saw a school bus pulling away from the curb. Due to the proximity of the bus to the curb, Katz, who was too far away to take action, explains the back end of the bus swung approximately 2 feet onto the sidewalk while pulling away. 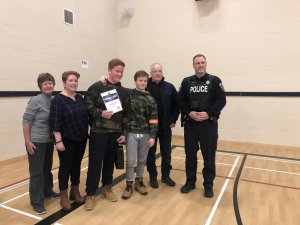 It all happened quickly and the two kindergarteners did not notice the situation they were in as the bus began swinging towards them. That’s when Katz saw Grade 8 student, Abel McHugh, who was passing by the kindergarteners, notice the potential danger and put an arm out to gently guide the two young students away from the path of the bus.

Although the kindergarteners continued on with their day, not really realizing what happened thanks to McHugh’s calm demeanor, Katz immediately walked up to him. She made sure he was aware that his actions were necessary and appreciated during the close call.

McHugh, who is also a hockey player for the Level A, Glancaster Bombers, did not even realize the magnitude of his quick actions, “I didn’t really think about what I was doing at the time, I just acted.”

When Katz made members of the administration aware of McHugh’s heroic actions, they decided to inform their school’s police liaison, Jeremy Dinning.

“When we heard about it we knew he needed to be recognized, we [police officers] love seeing hero stories and we wanted to thank him for his heroic actions,” Dinning explained. 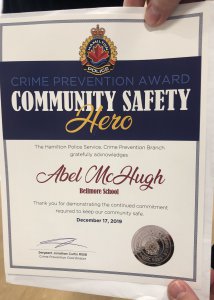 On Jan. 8, 2020, Bellmore held an assembly to recognize McHugh and Dinning presented him with the Community Safety Hero Award and gift bag from The Hamilton Police Service. Dinning, who has been Bellmoore’s police liaison for three years, said this is the first time he has presented this award to a student.

McHugh’s parents attended the assembly to celebrate their son.

The assembly started with Vice Principal Laura White teaching the students that, “…a hero is someone who inspires us by the example they set.”

Bellmoore’s Principal, Priscilla Mochrie describes McHugh as a, “humble hero”. She explains she is proud not only of McHugh, but of Katz for being a caring adult who acknowledged an action that some people may have brushed off as simply a close call and moved on.

It is essential to foster a culture of positivity by acknowledging good deeds. This can help to boost the confidence of students, therefore resulting in students who are not afraid to step up and help others.

Deb Katz stated at the assembly, “Whether you are a student in the school or outside in the community, we can all make a difference.”